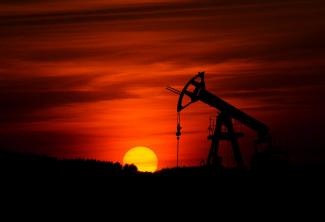 How Geopolitical Tensions May Impact Oil Prices and the Economy

Conflict in the Persian Gulf has spurred modest oil price volatility in recent weeks, but prices didn’t spike to high levels seen during some past conflicts. That’s partly because rising U.S. oil production has shaken up the global oil market since 2010.

Crude oil prices still react to geopolitical events and other unplanned supply disruptions. However, global oil supplies exceeded demand by 0.9 million barrels per day in the first half of 2019, creating an oil glut that is helping to hold down prices. The International Energy Agency predicts that global demand for oil will rise at a slower pace in the second half of 2019 than previously expected, while noting deteriorating trade and manufacturing activity.1

Here’s an update on current events that are sparking oil price movements as well as some potential effects on the economy.

The British Royal Marines intercepted an Iranian oil tanker in the Mediterranean on July 4, and Iran retaliated by seizing a British-flagged oil tanker in the Strait of Hormuz on July 19.2 The Strait of Hormuz is considered a “chokepoint” between the Persian Gulf and global markets because about one-third of the world’s seaborne traded oil passes through the narrow waterway.3

Six oil tankers and a U.S. spy drone have been attacked in or near the same area since May. Insurance rates for ships that navigate this high-risk area have increased tenfold since the conflict began, which adds to shipping costs and oil prices.4

Brent crude — the benchmark for global oil prices — rose a modest 1% after Iran seized a British oil tanker on July 19. But that was after prices fell roughly 6% during the previous week in response to concerns about the strength of the global economy, along with the return of U.S. oil production in the Gulf of Mexico after a hurricane.5

Starting in the mid-2000s, the use of technologies including seismic imaging, hydraulic fracturing, and horizontal drilling has allowed U.S. producers to extract more oil from shale deposits that were once thought to be depleted.

As a result, domestic oil production has more than doubled since 2011, and producers are now pumping more than 12 million barrels a day. The United States has also become the world’s top oil-producing nation, responsible for 18% of the world’s total in 2018. Saudi Arabia and Russia follow behind with 12% and 11%, respectively.6

OPEC — a union of 12 member countries that produce more than 40% of world crude oil — still has the power to influence prices, albeit to a lesser degree than it had in the past.7 In early 2017, OPEC, Russia, and some other major oil producers (dubbed OPEC+) formed a pact to collectively reduce output. This agreement among nations with a majority of market share helped reverse a precarious multi-year slide in oil prices.8

More recently, existing OPEC-led crude oil production cuts were extended for nine months (through March 2020), which put some upward pressure on prices. Still, price increases are expected to be limited because the United States and other non-OPEC nations have enough capacity to meet the projected growth in demand.9

Will Oil Spill Over?

Crude oil plays an important role in the manufacturing and worldwide distribution of numerous products ranging from food to electronics. When rising fuel costs are passed on to consumers, it can drive up inflation and reduce the purchasing power of wages. Gasoline and heating oil (which are derived from crude) are essential expenses for many households, so when prices spike there is less money available to spend on other goods and services. And altogether, consumer spending accounts for about two-thirds of U.S. gross domestic product (GDP).10

For these reasons, high oil prices have long been blamed for driving down GDP growth, and low prices have sometimes provided an economic boost. But this relationship has become more complicated in recent years, largely because the United States has expanded its presence in the global oil market.

The domestic oil industry now employs more workers and is a larger contributor to the U.S. economy. So when market conditions arise that are problematic for oil producers — such as low oil prices — it can have a negative impact on the nation’s GDP growth.

Domestic oil exports were prohibited by U.S. law until 2015, but overseas shipments have been ramping up quickly. U.S. crude exports set a record of 3.8 million barrels per day in June 2019 and are projected to top 9.0 million barrels per day by 2024. At this rate, the United States would surpass Russia and be right at the heels of Saudi Arabia, the world’s top oil exporter.11–12

Becoming a dominant oil producer and exporter could give the United States more control over its own economic destiny. For example, global oil prices might be influenced less by OPEC’s production decisions and more by how quickly U.S. producers can ramp up or down to meet ever-changing demand levels.

Now that the United States is less dependent on foreign oil, domestic fuel prices might prove to be less sensitive to geopolitical events than they were in the past. Even so, oil prices will likely continue to fluctuate as events unfold, and a serious escalation in the conflict could cause a spike that might have broader implications for the economy and investors.

This information is not intended as tax, legal, investment, or retirement advice or recommendations, and it may not be relied on for the purpose of avoiding any federal tax penalties. You are encouraged to seek advice from an independent professional advisor. The content is derived from sources believed to be accurate. Neither the information presented nor any opinion expressed constitutes a solicitation for the purchase or sale of any security. This material was written and prepared by Broadridge Advisor Solutions. © 2019 Broadridge Investor Communication Solutions, Inc.